Below are selections from my media art portfolio, if you want design instead of art, please see my design portfolio.

Short story and concept for animation
Tech: Word processor, After Effects, Maya
See: Video of rough animation from 2006 (01:08, 15MB MOV)
Collaborated on short story of movement and change and how a well-intended life can be fascinating and strange to others because the past is always there, even when you're not sure you want it to be. The animation reflects early stages of planning and storyboarding. 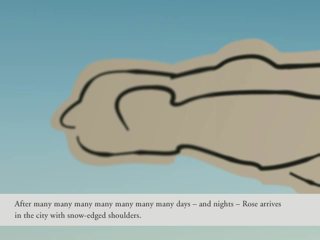 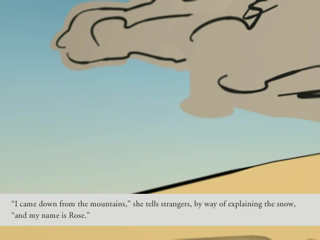 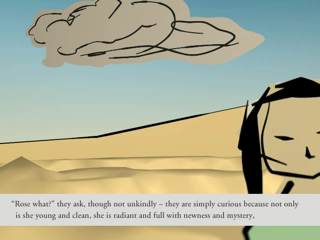 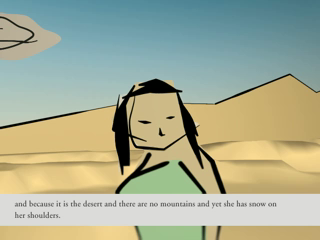 Physical interactive media installation
Tech: Conductive thread, MaxMSP and Jitter with custom wiring and hardware
Produced experimental sound interface as an "imperfect interface" where the movement hundreds of long hair-like threads. The system is a supplement to sleep; a device that one can reach over and tussle until a pleasing drone is found, then fall peacefully back to sleep. 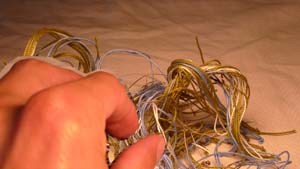 Physical interactive media installation
Tech: MaxMSP and Jitter with custom wiring and hardware, Illustrator, After Effects, InDesign, Maya
See: Read "Isolina" in PDF
Authored and produced award-winning interactive storytelling exhibit woven around a personal narrative of childhood illness.
As traumas fade and the past becomes distant, memories re-work themselves, fashion themselves into stories that uphold a sense of being at that moment. Freedom to explore devoid of expectation or chronology, this installation presents itself as just being. There is a tree for playing or ignoring. A bench for sitting, a story to read. Marbles to play with, and a story to watch on the wall. These activities are available, but none are necessary.
My thoughts on growing up are generally unfocused, making it hard to pin-point exact happenings, memories, and sequences of events. As such, participants are offered an opportunity to experience my story through this lens. Participants are encouraged to do as they please with the installation. They can hang out at the shelf near the main installation or just sit on the bench next to the shelf. On approach, the video behind the tree shows a default scene. This image pulses to and from white in a breath-like manner to indicate that Isolina is waiting. Her story is yet to be told. 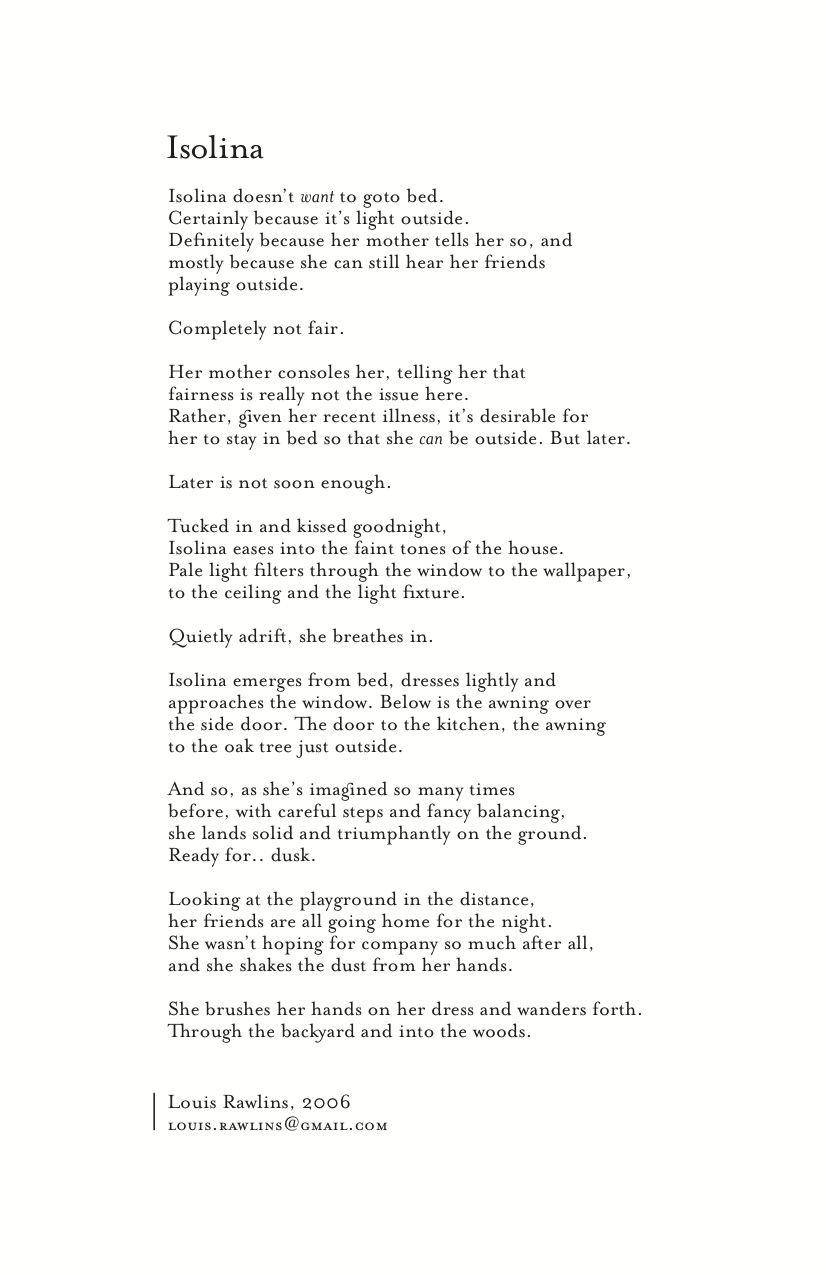 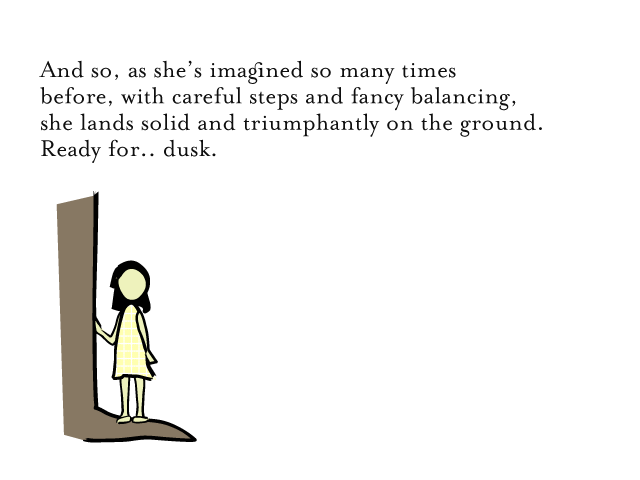 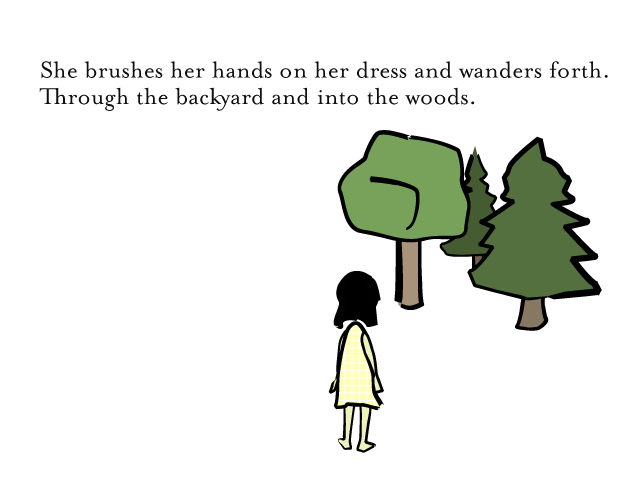 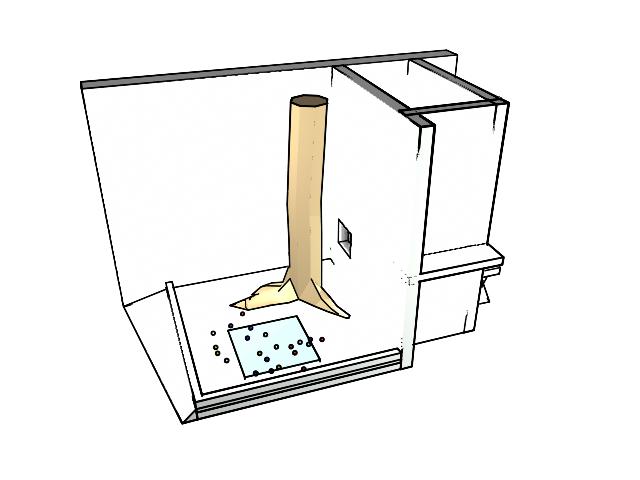 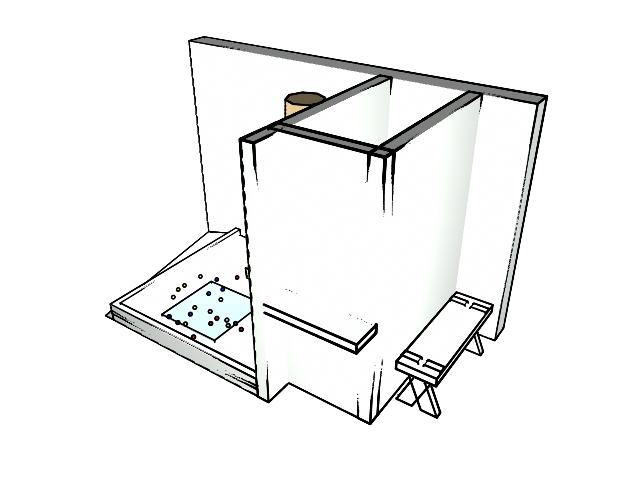 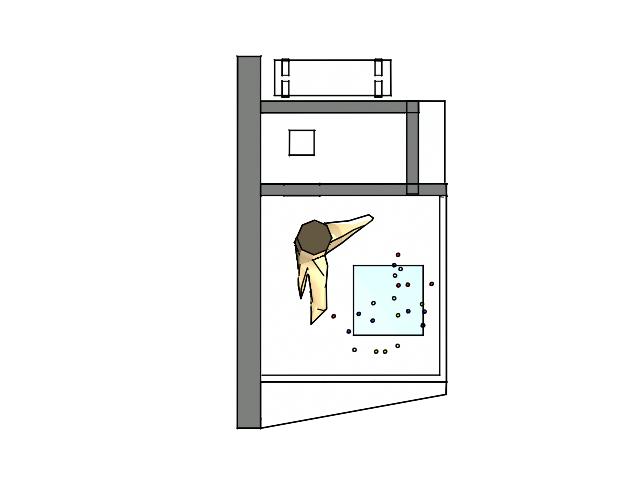 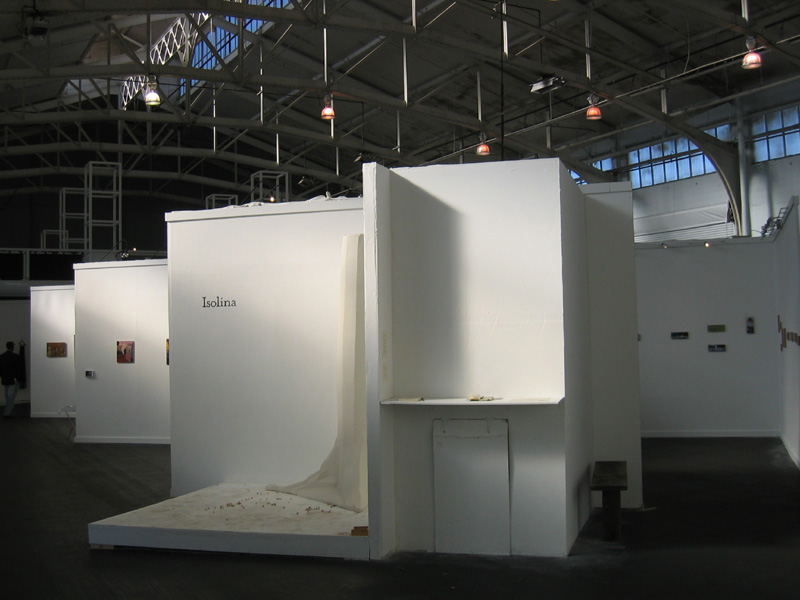 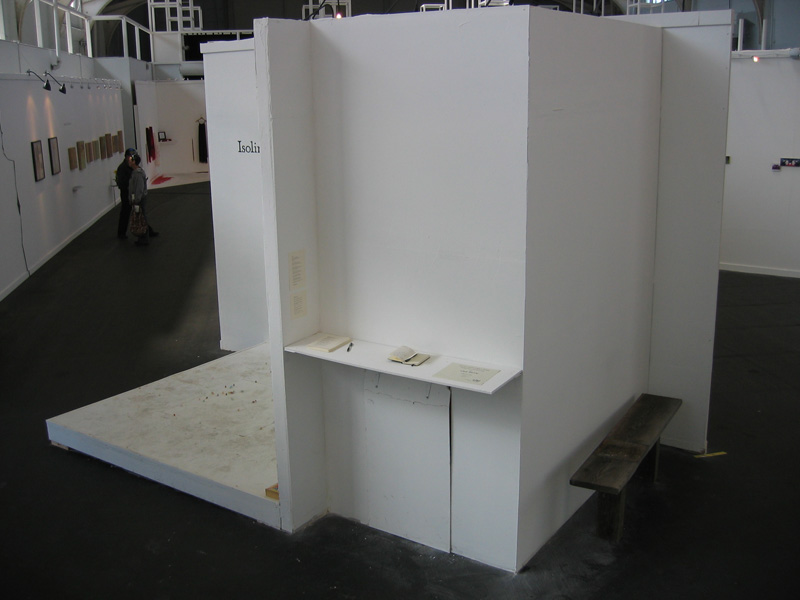 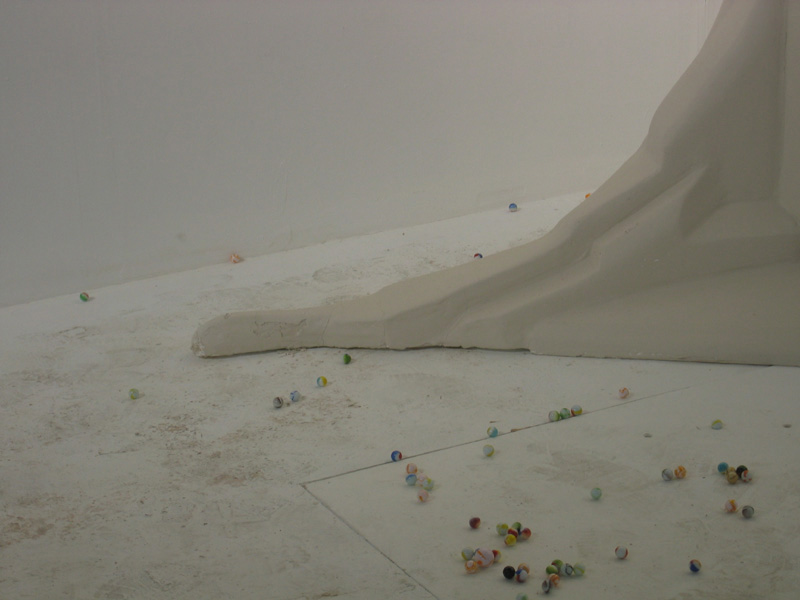 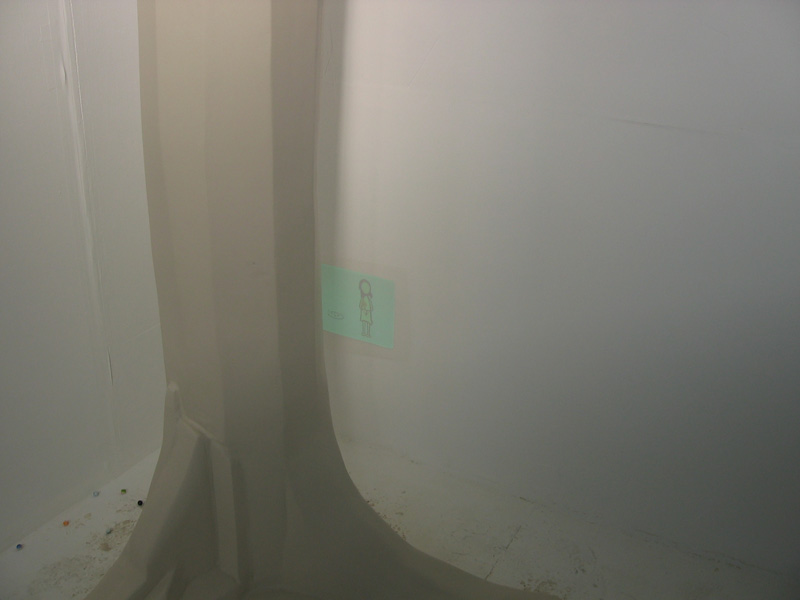 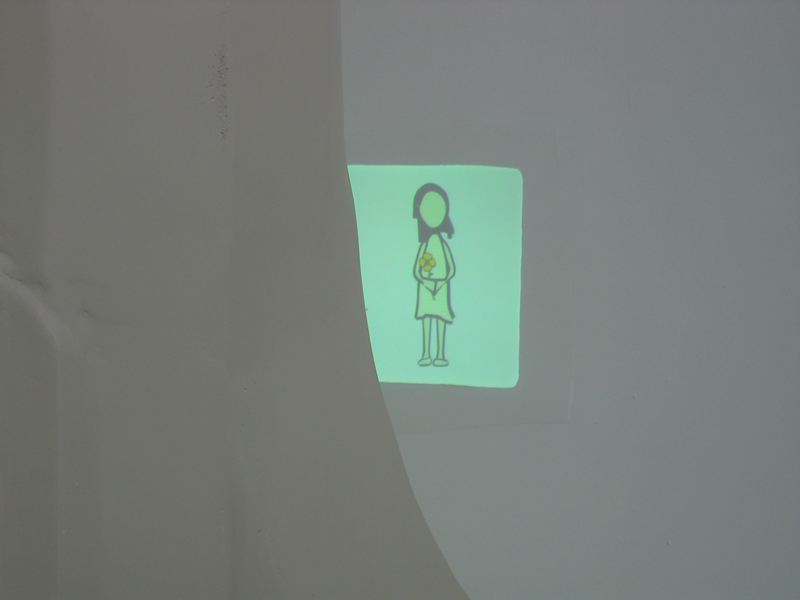 Concept for interactive media installation
Tech: Word processor, After Effects, Maya
This piece is made to be interrupted. It tells a story, visually, textually; but it does not invite quiet contemplation for the entire story. Quite contrary to the native gallery-goers instinct, the piece requires noise to tell you its story. It will not allow for peace -- though the story itself is sometimes peaceful -- it thrives on cellphones and loud talking, bumps and mis-interpreted meanings. Video on each screen appears to be both discrete and inter-related across all screens. Field audio plays from speakers within the screens, complementing the imagery. When users approach the screen, there is no immediate reaction from the video. But, noise of a certain loudness triggers a text overlay which appears as subtitling in white bars on the bottom of the screen.
A prototype application has been developed that explores the functionality of the installation running with interaction via a mock-up "voice actor", your own microphone, or no interaction at all (which allows for viewing of the entire narrative, un-interrupted). 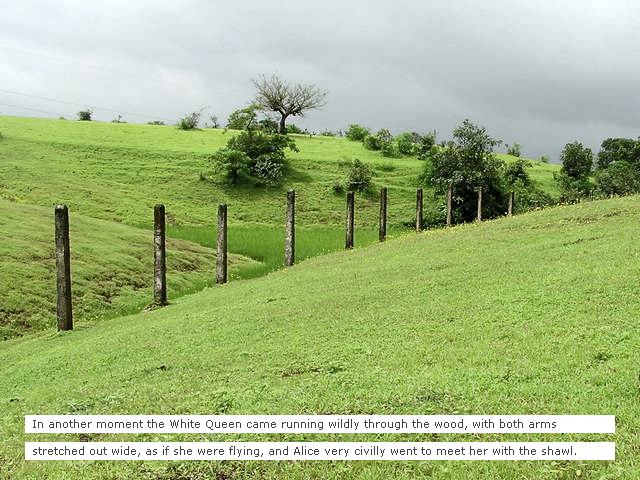 Video Performance and Installation
Tech: MaxMSP, Jitter, (2) iSight Cameras, Laptop
See: Rx Gallery performance (03:00, 37MB MOV)
See: Visual description of performance (04:46, 30MB MOV)
See: Screen render, with audio generation (04:31, 62MB MOV)
What began as visual exploration of the surrounding space and feedback, ultimately turned into a performance piece. Soft, rhythmic colors appear on the screen based on the motions of the performer, capturing the visual environment and layering it back onto itself. 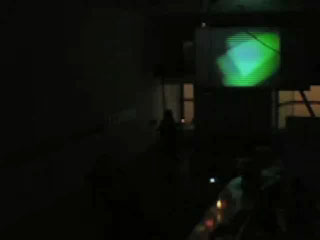 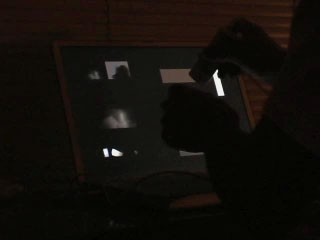 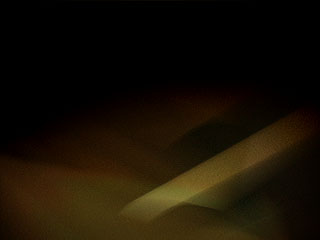 Sound Installation
Tech: MaxMSP, Four-channel audio system
See: Video of Room-Scale Installation (03:40, 49MB MOV)
This installation is the culmination of work dealing with the feedback of the surrounding environment. A benign object exists in the middle of the room, humming and lowing. Once the audience creates a noise, the piece responds with altered versions of the same. Sound is passed from the user to the environment, to the machine and back out again in a natural cycle. The piece is one of self-awareness and play. 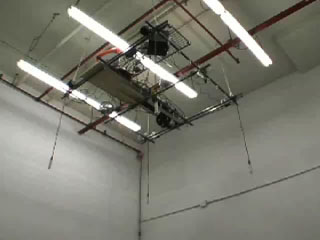